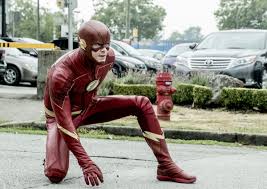 THE FLASH: Fun With Fart Jokes

Barry gets cranky when Ralph doesn’t do things his way. Choosing instead to combat his fear with Jokes, and yes, a whoopee cushion.   That’s the plastic bladder that sounds like a fart when someone sits on it. This wasn’t a great episode. It felt like a filler story that just took up space while we wait for the inevitable conflict with DeVoe. Which is a shame because I love The Flash and was looking forward to tonight.

Everyone seemed to have a bad attitude this week. Barry was arrogant and pushy, benching Ralph because he wasn’t behaving the way Barry wanted Ralph to. And wait, isn’t Iris supposed to be the team leader? That should have been her call. Harry was also out of sorts, still mad because he basically doesn’t know everything, which is also arrogant. And me thinks that Harry is going to boost the power on his thinking cap and zap himself into a super villain. And Gypsy’s dad vibes over to ask for Cisco’s help with a performance issue. And yes, he’s cranky too. Turns out he’s too old to vibe now. So it’s retirement time for him. Wait, didn’t the same thing just happen to Jay Garrett a few episodes ago. Talk about your similar subplots.

The bus-meta this week can nullify gravity, causing things to float. So she uses her ability to rob people, because that’s what people with powers do.  This whole bus meta-human storyline is getting a bit predictable. And answer this if you can; Why do these thieving people start their lives of crime just when Team Flash starts looking for them? It’s almost been a year since they got their powers, so what have they been doing all that time? The meta-human, nickname Null, zaps Barry and he floats way high, and then falls. Ralph saves him by stretching to become a human whoopee cushion for Barry to land on, farts and all. Who wrote this, a twelve-year-old?

LAST WORDS: We don’t see that much of Joe this episode, or Caitlin, and Cecile is a complete no show. And to be honest, it didn’t feel like the writing staff showed up to the party either. And how does Ralph become Joe West? It happened before, and both times it was off camera, so they never show how it’s done. Listen, I’ll go along with the idea that Ralph can change color as well as shape, but I want to actually see him do it once. So stay tuned!!!!!!!