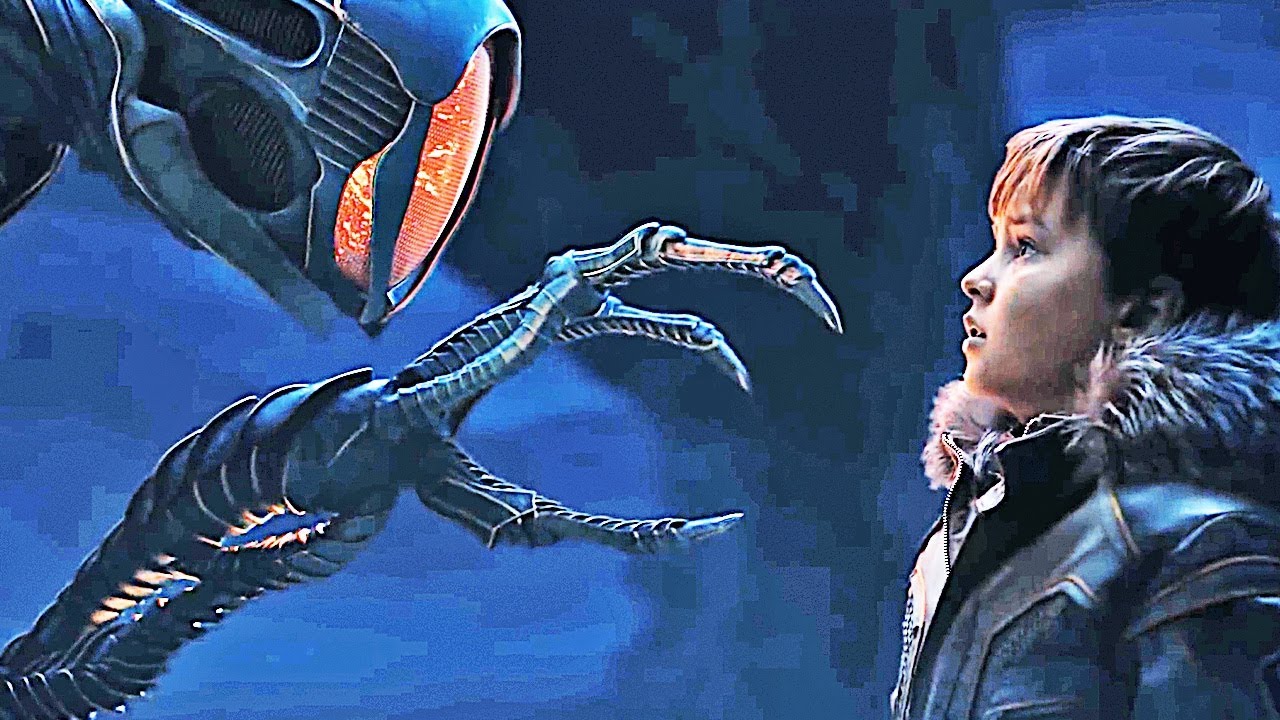 DANGER WILL ROBINSON:  If you have not watched the series yet, and plan on it, you should not be reading this. I will be talking about the 10 episode series as a whole, with tons of spoilers. So turn back now….  you have been warned…

This version of Lost In Space is a family adventure series, minus the camp of the 60’s series, which has it’s up and downs. Overall, I liked the show, though I did find it a bit repetitive and a bit boring. And it really didn’t feel like Lost In Space. But surprise! It wasn’t supposed to be Lost In Space. If you watch all ten episodes, you learn, by the end of episode ten, that you weren’t watching the series, you were watching the set up… The tenth episode ends with a cliffhanger. The Robinson’s are truly lost and alone, and they’ve grown to be the family you remember, minus the robot. (But I have a feeling the robot will make a reappearance if there’s a season 2)

Lets start with the Robinson kids: Will Robinson is still a boy genius, but he’s got his flaws, so he’s not a total know-it-all. In fact, Will Robinson washed out on the astronaut training tests, and his Mom had to cheat to get him in the program. Daughter Judy is the know-it-all. A Doctor at eighteen, Judy acts like she should be in charge, even though she makes some really wrong and rash decisions, almost getting herself killed. And youngest daughter Penny is the family smart-ass, heroic in her own way, but still the comic relief in the family.

In this series, the Robinson’s start out as a fractured family. Mom and Dad are on the outs, mostly because of Dad’s negligence back on Earth. As seen through flashbacks.  But Mom is still bitter, and Judy is totally on Mom’s side of that fight. So things are tense, even though they are all together on this intergalactic relocation project. But things go way wrong on the Mother Ship, and the passengers evacuate in their Jupiter Class escape transports during a mysterious alien attacked. The Robinson’s are on the Jupiter 2, and they crash on a nearby planet. So after trails and tribulations, the family comes together by episode ten.

But the Robinson’s are not alone on the planet. About six other Jupiter transports crash along with the Jupiter 2, and the castaways band together to get off the hostile and dying planet. . And not all the castaways are human. Will Robinson finds and rescues an alien robot. But that robot has an awful secret. It was part of the alien invasion fleet that attacked the Earth Mother-ship, killing a lot of the Earth colonists.   But the robot’s ship also crashed on the planet, and it was injured. And when Will finds it, the robot doesn’t remember anything about its murderous mission. But it owes Will a life-debt, so it obeys him now. Which is a good thing, because he’s protective, and super strong. Though, when the Robinsons reunite with the other survivors, they aren’t too keen on having the renegade robot as part of the team, even if he is reformed.

Doctor Smith is still a big part of the plot too. She’s a liar and a killer, and not a real doctor. A criminal from the start, she stole her sister’s I.D to get aboard the Mother Ship. Then, when she’s recognized as a stowaway, she kills a guy to keep her secret. But she gets caught. Though luckily for her, that’s when the robot attacks the ship. She gets away in the confusion. But to board a Jupiter escape transport, she steals the identity of the real Doctor Smith, who she leaves to die. Then she boards that Jupiter transport with a smuggler named Don West. And after that Jupiter transport crashes, killing everyone else aboard, they end up on the Jupiter 2, with the Robinsons.

Long story short: Don West does good things, while Doctor Smith does bad things. Will Robinson starts to man-up, overcoming his fears and failures. Judy, Don, and Don’s pet chicken start to bond. Yes, Don has a pet chicken. And Judy is 18, so their attraction is cool. Penny gets a bit more responsible, but she pretty much remains a smart-ass. Mom and Dad finally get rid of their mad-on and make up, reuniting the family. The robot gets compromised by Doctor Smith, and temporarily helps her with a mutiny attempt. But when push comes to murderous shove, the Robot sacrifices itself to save Will Robinson and the family. Oh, and the planet is about to blow up, Krypton-style. Which is a bummer.

All the Jupiter escape transports make it to the Mother Ship, except the Jupiter 2, which gets sucked through a black hole. It ends up light years away from everyone and everything, and its on route to the Robot’s home world, which looks alien and dangerous. So now this looks like the Lost In Space I remember. The now loving Robinson clan, plus the heroic Don West and the evil Doctor Smith, are hurtling through space aboard the Jupiter 2, with no idea where they are or what they’re going to do. And if I know my robots, Will Robinson’s pal is probably clinging to the outside to the Jupiter’s hull awaiting a rescue.

LAST WORDS: Though the series had some pacing issues, and lacked a sense of wonder and fun, I still liked watching it. And I hope there is a season two, as long as they include the robot. I liked the alien spin they put on that character, and he had more good feels than some of the family members. I’m looking at you Mom and Dad, who spent most of the series clashing with each other. And question; now that everyone knows that Doctor Smith stole that identity from someone else, will they continue to call her Doctor Smith instead of her actual name? And what about the chicken?