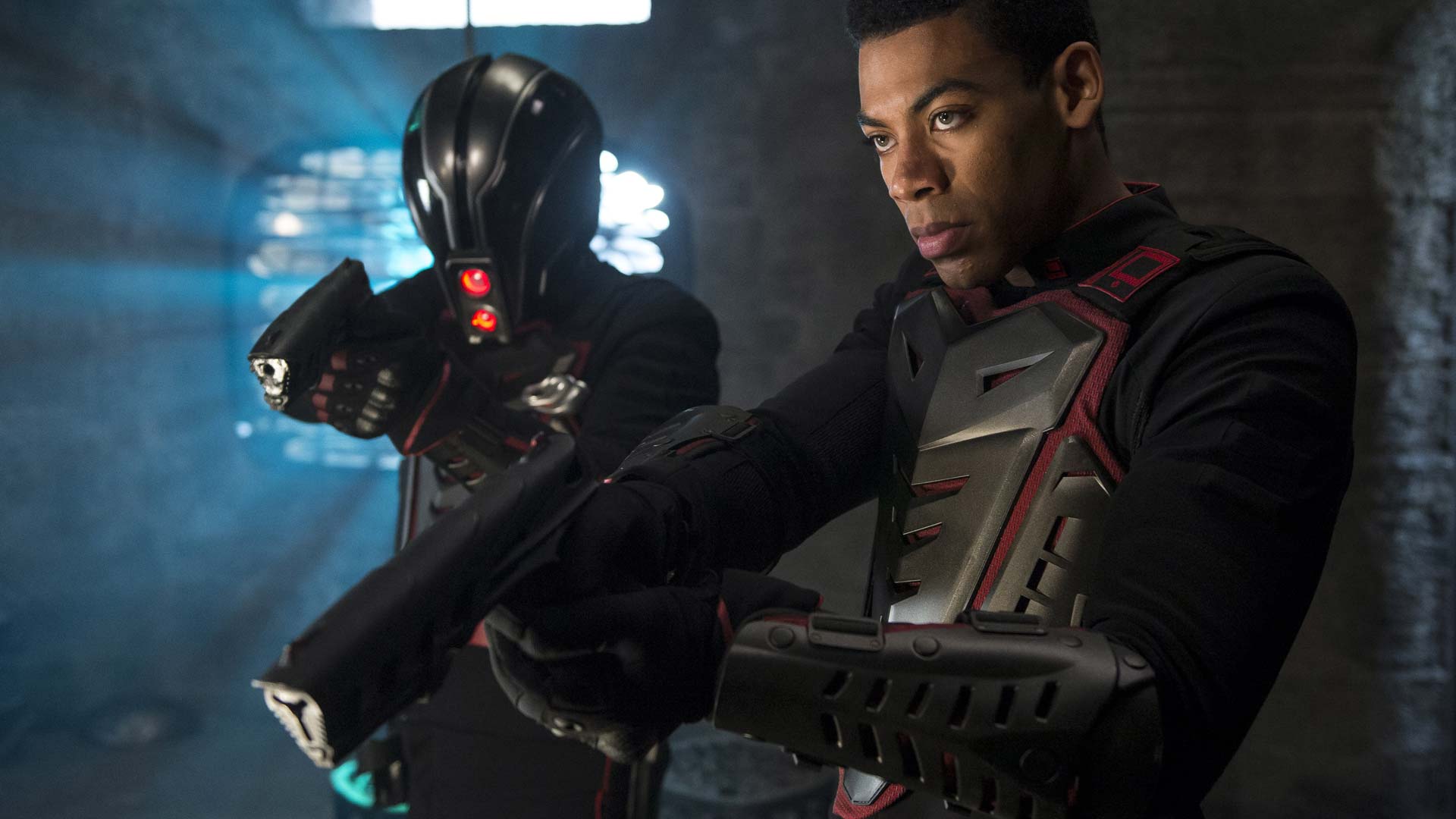 What do you do when your father turns out to be a self-serving coward, and tries to kill you? Ask Nyssa-Vex, because her father jumped on the Brainiac bandwagon without hesitation, and then tried to blow her head off to placate him. No Father’s Day present for you Daron-Vex. When it comes to knuckling-under, you go down without a fight.

This was a good episode. There was a lot of action, accusations, and allegiance juggling. Seg and Lyta return to Kandor with the wounded General Zod, and that’s when they find out about the attempted coup. Lyta runs into her fiancé Dev-Em and he tells her everything, including the fact that her Mother is now a wanted fugitive. Dev also confirms that Brainiac has taken control of The Voice Of Rao. Which is a bad thing. So Lyta and Dev go after Jayna-Zod, while Seg and Kym take General Zod to a local healer.

Meanwhile back at The Fortress; Adam Strange is drinking his blues away, while simultaneously walling in self-pity. He confides in the hologram of Grandpa-El that he’s not a hero, he’s a wannabe loser. Remember that last episode Seg-El pretty much went off on Adam for not telling him that Krypton was going to explode someday. And Seg-el kicked Adam to the curb, telling him to take his Zeta beam and leave Krypton forever. But the jokes on Seg, because the Zeta Beam device is broken.

Lyta and Dev find Jayna in the badlands outside the dome and convince her to come back with them. But the big twist of the episode is that Dev-Em is now an agent of Brainiac. All the Sajatori Soldiers who attacked The Voice Of Roa, aka Brainiac, were absorbed into the collective, a place of enlightenment and eternal life. And it’s Dev-Em’s job to bring Lyta and Jayna back to Brainiac, or kill them. But Lyta opts for the third option and kills Dev-em. But full disclosure, if Dev is really a part of Brainiac, can he be killed?

As stated earlier, Nyssa’s head is on the chopping block too. But before dear old Dad can shoot Nyssa in the head, she gets the drop on him, and almost kills him instead. Then Seg arrives to free Nyssa, which in itself is a process. But they make it out and rendezvous with the others. And now Lyta, Jayna, General Zod, Seg, Nyssa and Kym are the only ones left to fight Brainiac. You’d thank that Adam Strange would man-up and join them, but once he’s sober, he takes the opposite view. To preserve the timeline and save Superman, Adam intends on killing General Zod and allowing Brainiac ot take Kandor, which will eventually lead to Krypton’s destruction.

But Team Seg-El has a plan; during the enlightenment celebration they’ll attack The Voice Of Rao, which won’t kill me, but it will expose his new Alien nature to everyone. And their hope is that the citizens of Kandor will rise up against Brainiac, once they know the truth. But before Team Seg can move forward with their plan, The Voice Of Rao admits to everyone that he is no longer human. He plays the God-card and promises everyone unity and eternal life. And that’s an offer too good for anyone to pass up. So Team Seg is shut down by the crowd’s enthusiastic acceptance of the miraculous offer. Now what are they supposed to do? Stay tuned!!!

LAST WORD: It’s kind of cool to see the main Kryptonian characters on the same team. But now Adam Strange appears to be more foe than friend. I know he just wants to preserve the timeline, but that means that Brainiac gets away with Kandor, and the entire planet explodes. So what’s a time traveler supposed to do?