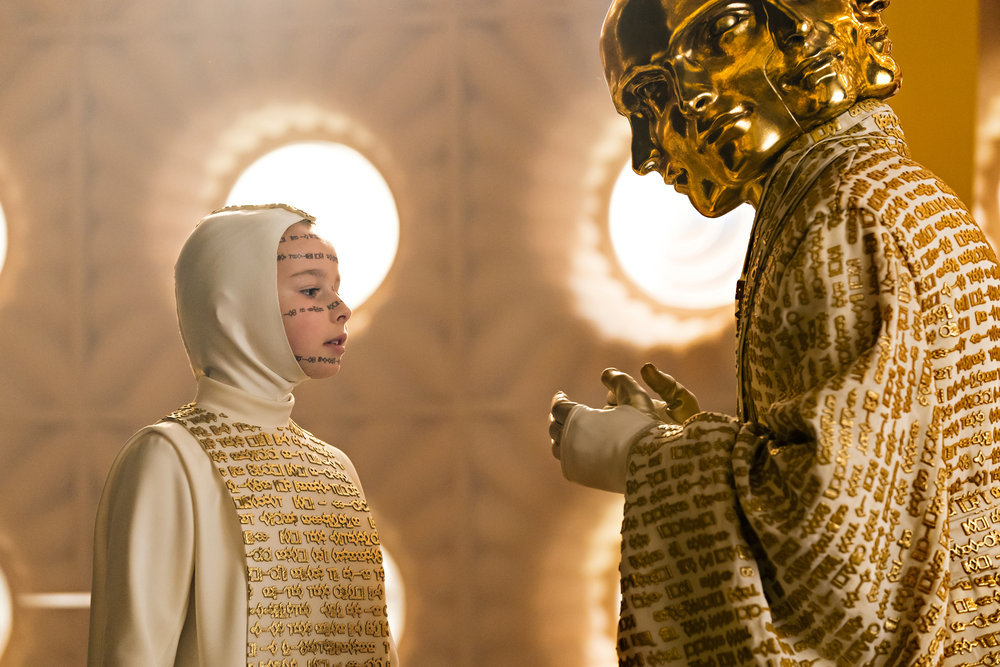 Why are Adam Strange and Daron-Vex on the same side now? Vex is a self-serving coward. And even Brainiac knows it. But has Adam become the real villain of this story? Adam wants to preserve the timeline, but that means that Brainiac takes Kandor, and the planet explodes, leading to the creation of Superman. But is one man of steel worth all that death and destruction? Seg-el doesn’t think so. Which means that Adam and Seg are at odds. So Adam aligns with Daron-Vex, who doesn’t really care about Krypton. He only cares about himself.

Why are Seg-el and the radical faction known as Black Zero on the same side now? Black Zero wants to tear down Kryptonian society and start over from zero, thus the name. But now that Brainiac controls the Voice Of Rao, the leader of Kryptonian society, Seg-el and Black Zero have a common enemy, which makes them tentative allies. Team Seg needs a small army to help stage another coup, and Black Zero is willing to accommodate. But if the coup is successful and The Voice Of Rao is silenced, who becomes the leader of Krypton? Does the House of El rise to power, does Black Zero take over, or does General Zod snake his way into leadership? And was that Zod’s plan all along?

Why are Dev-em and Team Seg on the same side now? Yep, Dev-em is alive. Lyta shot his arm off in self-defense and then left him bleeding out on the frozen badlands. Dev had become an agent of Brainiac. But Dev-em is a survivor. And when Lyta and Seg-el come back to scavenge the corpse and tap into Brainiac , they find that Dev-em is very much alive. And he’s his old self again. I guess the pain and shock of having your arm blown off, in addition to the bitter cold, was like a painful reality check. And now Dev-em is all about helping Team Seg fight Brainiac.

Using Dev-em’s link to Brainiac; Seg-el, Lyta-Zod, Jayna-Zodd, Nyssa-Vex, General Zodd, and Black Zero attack The Voice Of Rao, bringing him down. But remember that down doesn’t always mean out. While it appears that The Voice Of Rao fell to his death, after being shot by Jayna. He turns up alive, with a terrible plan for revenge. The Voice of Rao turns Ona, the adorable little girl and faithful follower, into a human bomb, and he sends her out to kill Seg-el. But just as she explodes, Adam intervenes, creating a shield with the zeta-beam device. The blast kills the sweet little girl, which is horrible, and sends Adam to a mysterious place. Where he comes face to face with a new player in this deadly game; one I don’t recognize.

LAST WORDS: This episode definitely felt like a game changer. Though I’m not sure yet how Ona’s death, or the arrival of the new stranger, will effect everything. I’m sure it will… And we see a glimpse into Adam’s past. Or we HEAR a glimpse. We hear the voices of Sardath and Alanna in a flashback. Sardath is the scientist Adam stole the Zeta Beam from, and Alanna is his daughter. Neither seems to have much faith in Adam’s ability to save Superman. And though Adam and Alanna got married in the comics, it’s apparent that things didn’t go well for them as a couple here… And what about Seg-el and Nyssa-Vex’s non-love child that’s developing in the genesis chamber?  Will he die so that Jor-el can live? – ONLY 2 EPISODES LEFT Y’ALL……..