There really is a city named Metropolis, and its hero is Superman.  They’ve celebrated this national treasure every year for the past 40 years, and believe it on not, you’re invited.

June 7th – 10th is the 40th anniversary of the Superman Celebration in Metropolis, Illinois.  That’s where like-minded Super Fans celebrate the World’s 1st and best Hero.  You can slip into your tights, put your underwear on over your clothes, and party with like-minded people of all ages.  There are skits, a parade, a film festival, a costume competition, special celebrity guests, special superman-themed events and booths, a one-of-a-kind superman museum,  a Noel Neil memorial statue, and  a two-story superman statue smack dab in the middle of town.  And if that’s not enough super goodness for you; the town even has it’s own official Superman, Joshua Boultinghouse.  And the man’s definitely a Truth, Justice, and American Way kind of guy! (I should know; he’s my best friend.) 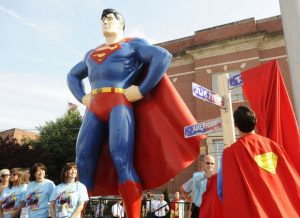 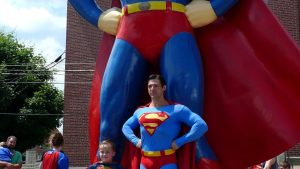 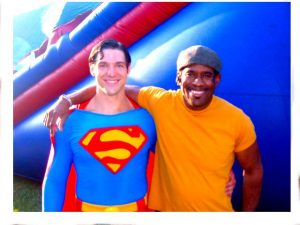 And my name isn’t Jimmy Olsen, but Superman really is my best friend, and here’s the pic to prove it.  (Pictured: Joshua Boultinghouse & Walter Doty)