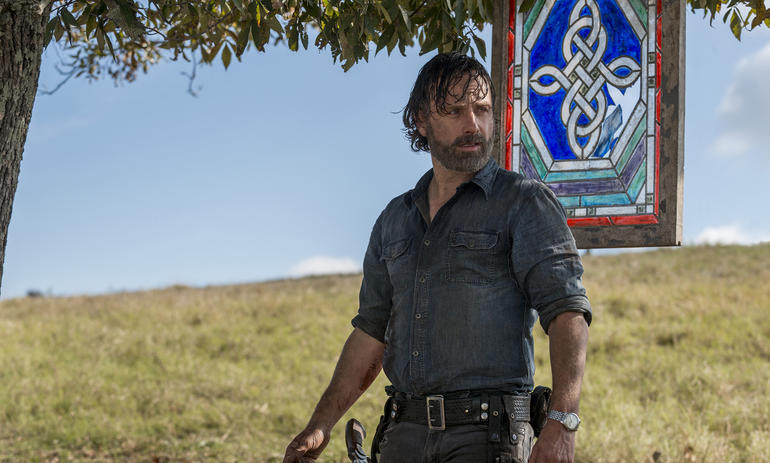 If reports are accurate, and Andrew Lincoln is leaving The Walking Dead, will the show go on?  The short answer is ‘YES’ the show will continue, probably with Daryl Dixon taking the lead.  But who will be watching?  Because I know it won’t be me.  When the show started it was a weekly television event.  Even spawning and hour-long weekly after-show that I also watched religiously. I even had viewing parties every week, where about twelve close friends came over to share in the excitement.  But over the last few years the show has lost it’s luster.  Episodes became repetitive, and the narrative seemed to meander along with no end in sight. And I found myself watching the last season finale alone, because everyone else I knew had given up on the show.

So for me, when Rick Grimes leaves the show it will be the perfect jumping off point.  The show was always his story, so his end will be the end, and a pretty sad one at that.  But the show will go on.  Though not with Maggie, since Lauren Cohan will be starring in her own ABC Series called “Whiskey Cavalier.” So she’ll be gone after about six episodes, and that leaves Daryl and Carol, the only original cast members left, and fan favorite Machonne. But can they carry a show that’s pretty much limping along on it’s last leg?  And did the producers know that Rick was leaving when they killed off Karl?  Because Karl could have at least carried on the Rick Grimes legacy a little longer if they’d kept him alive.

But who knows, maybe they’ve got a great kick-ass plan for the show that will knock everybody’s socks off. And we’ll all be sitting around sockless, wondering how the show got so good again. Or maybe The Walking Dead is so far gone it’s just a dead show walking.  We’ll all just have to wait and see.

NOTE: No official word has come down from The Walking Dead, AMC, or Andrew Lincoln, so nothing is set in stone just yet.  For all we know this could be a contract renegotiation tactic, or just fake news.  Or maybe AMC will make Lincoln an offer he simply can’t refuse, and he’ll commit for another season or two. We don’t know.   This story is ongoing, so stay tuned…