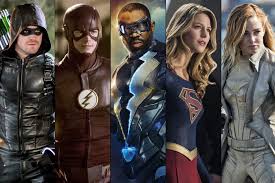 Hey everybody, there hasn’t been much real news lately, but that ends next week.  San Diego Comic-con starts on Wednesday and all the CW Superhero shows will be represented.  Arrow, The Flash, Legends of Tomorrow, Supergirl and Black Lightning, will all have big panels next friday.  SyFy’s Krypton will also have a panel.  And while Fox’s Gotham won’t be there, they do mention that there’ll be a first-look trailer for the new season, which will be their last.

Comic-Con is where show’s roll out their celebs for all the worlds to see.  And then they entice us with information and teases about the upcoming season.  And while they don’t give away enough to spoil what’s to come, they do let some things slip to ensure we tune in.  So look to Nerd Report to keep you in the know.   But, until real news actually drops, lets look back on what we already know.

Supergirl will not be reuniting with Mon-el.  He’s headed back to the future to rejoin the Legion. Wynn also left for the future, and will no longer be a series regular.  But Winn still may return for an episode or two.  Hank resigned as director of the DEO, leaving Alex in charge.  But he’ll still be around when needed.  The Martian Manhunter didn’t leave the show.  Hank’s Dad did die though, so he won’t be back. And Brainiac, or Brainy, will be sticking around and working with the DEO.  In the comics, Brainiac and Supergirl were briefly a couple, so that may become a thing as time passes.  But you never know.

On The Flash we saw the arrival of Nora Allen, Barry and Iris’ grown daughter from the future.  And while she did save Barry’s life.  There is some time tampering going on, which always leads to a whole lot of bad news.  And we also learned that Caitlin had the whole Killer Frost thing going on when she was just a kid.  So look for that storyline to unfold, possibly involving Caitlin’s Dad. Kid Flash will no longer be a regular on the show, at the star’s request, but he will make some guest appearances. Ralph is back, and will stretch into becoming a series regular.  CeCile had a baby girl.  And Barry’s back on the Police Force.

On Legends, Kid Flash will leave the roster and Constantine will become the new member of the crew.  Ava, Sara’s girlfriend, will also be back as a series regular.  And Amaya may be back too, even though she quit the team in the finale.  The Legends accidentally opened a portal into the supernatural, so they’ll be doing some demon round-ups throughout time, and not just anomaly’s.  And Rip Hunter may have died, but that doesn’t mean he’ll stay dead.  So don’t be surprised if he shows up again during the series run.

Quentin Lance died on Arrow, probably for good. Which is a shame.  But Diez, last season’s big bad survived, so expect him to make a return at some point.  Oliver outed himself to the FBI, so he’s headed to jail.  That’s a bummer.  That make Felicity an instant Mom.  Diggle will probably take up the Green Arrow mantle.  But who’s on his team?  That’s the big question.  We know that Roy is returning as a series regular, so I’m guessing he’ll put the red hood back on as Arsenal. But the rest of the roster is up for grabs.  Will Dinah come back as Black Canary, or will the newly reformed Black Siren take that spot?  And what about Mister Terrific and Wild Dog?

Black Lightning had an action-packed finale, but didn’t make too many changes.  Gambi pulled through in a pinch, and so he’s been forgiven and reinstated in the family.  Jennifer finally got a handle on her powers.  But I think she’s still got a lot of exploring to do before she figures out exactly what she can do.  And Jennifer never wanted to be a hero, so will that change? Or will Jennifer continue to pursue a normal life.  The government bad guy is down and out, but Tobias Whale is still around and dangerous.  And it looks like Mom has finally re-joined the family.  This show had a great year.!

And that’s it for the CW Superheroes.  But on FOX’s Gotham; The city got blown up, the people got evacuated, and the villains pretty much took over the whole shebang. Bruce Wayne, Jim Gordon, Harvey and the GCPD stayed behind to manage the madness. And on SYFY’s Krypton; Brainiac was presumably defeated and General Zod took over everything, thereby changing the past and dooming Superman.  And oh yeah, Doomsday just broke free and is about attack absolutely everything….  So stay tuned.

I’ll hit you back with more info after Comic-con!!!!