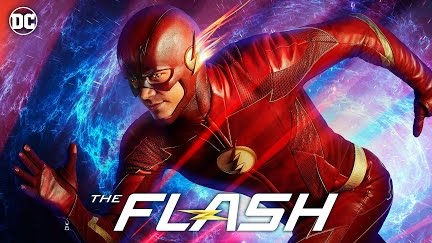 The title of this week’s episode is “The Death Of Vibe!”  And since this is an episode REVIEW, spoilers abound.  You were warned… Cisco does not die, AND he doesn’t lose his vibe powers.  But to get Vibe off the unstoppable Cicada’s hit list, Nora fakes Cisco’s death, saving his life.  And this was a win she sorely needed.  Because her trip back in time has sent ripples through the timeline, changing reality, and people have died.  So Nora’s been understandably down in the dumps lately because she feels responsible. Because she is. But Papa Barry did the same thing when he went back in time to try and save his Mom. So he helps her deal with issues, for now.

We get a new Wells this episode, Harrison SHERLOCK Wells, a brilliant detective.  But he’s a bit of a wild card, so Team Flash needs to keep an eye on him.  We also get a glimpse into the future, and see young Nora in The Flash Museum, which is housed at the futuristic Star Labs.  And that’s cool.  Then, also this episode,  Ralph and Caitlin confront Caitlin’s Mom, who still claims her Dad is dead. Even though his Death Certificate is a phony. But Caitlin discovers a coded message from her father, urging her to come find him.  SO, he’s either trapped somewhere, or playing a really long and demented version of Hide & Seek.

MY LAST WORD: I enjoyed the episode. Though I’m not digging the Big Bad yet. I don’t want to be dealing with Cicada and his magic dagger for the whole year.  I want Team Arrow to bag and tag this guy and dump him in the pipeline already and move on.  And Caitlin Snow is a lot more interesting when she’s also Killer Frost.  So I hope they don’t string us along all season before clearing up that mystery.  Bring her back soon, Team Flash needs her.    And Nora’s great and all.  But seems like having her here, hanging with Dad, is messing up the future, which is always a Big Mistake… Remember FlashPoint.