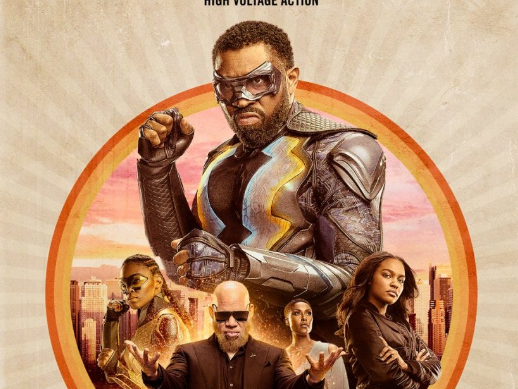 You’ve changed Black Lightning, and not for the better: Jefferson Pierce is no longer the upstanding principal of Garfield High.  And now he’s a “Not While you’re living under my roof” Kind of Dad. Forcing Anissa out of the house, and totally alienating Jennifer. And Instead of fighting the 100, the street gang from last season, there are ‘Pod Kids’ with dangerous powers now. And meta-humans are seemingly everywhere, people are raising from the dead.  Jefferson and Lynn even find a meta-human psychologist to help Jennifer try and get a handle on her powers. She can project her patients into alternate realities, to help teach them deal with errant powers. That’s a pretty specific skill set. And what did they Google to find her?

They killed Syonide, Tobias Whale’s silent but deadly body guard/assassin. I liked her!  And replaced her with the Altered Khalil, who’s powers are all about enhanced strength and shooting darts at people.   A silly ‘power’, but at least he can walk again.  And his hair grew super fast, so now he’s sporting cool dreds.  Khalil’s still mooning over Jennifer though, but since he almost killed her Dad, she’s understandably hesitant.  Plus he ‘darts’ people. Did I mention that?  And Mom Lynn finally got over herself and moved in with the rest of the family.  Though Lynn and Jefferson don’t see eye to eye at all, but at least they’re having sex again.  And Lynn is off working with the ‘Pod Kids’, instead of helping her youngest daughter out with her dangerous power flare-ups.  No wonder Jennifer feels abandoned and mistreated.

The New Police chief is Bill Henderson, Jefferson Pierce’s life-long friend.  He finally figured out Jefferson was Black Lightning, and while he’s a bit bitter about being kept in the dark, he still begrudgingly works with him.  I think that’s what bugs me the most about Season Two. Everybody’s upset about something.  Jefferson is upset with Anissa because she’s turned into an urban Robin Hood. Dressed head-to-toe in black, she steals money from drug dealers and gun runners, and gives it to free clinics and churches. But somehow, the bad guys haven’t figured out yet that the new black female Robin Hood, with the exact same powers as Thunder, is Thunder.  Gambi’s helping her though, trying to keep her safe. But that upsets Jefferson. Because Season Two is all about people being upset instead of working together.

The ratings have dropped to an all time low for Black Lightning.  It started out as the ‘grounded’ superhero show that was different than the others on the CW.  But with all these ‘Pod Kids’ and other Meta-humans, Team Arrow or Team Flash could show up and fit right in. Is that the new plan?  Fold Black Lightning in with all it’s other shows?  Because if it is, they’ve taken a big step away from what made Black Lightning special.