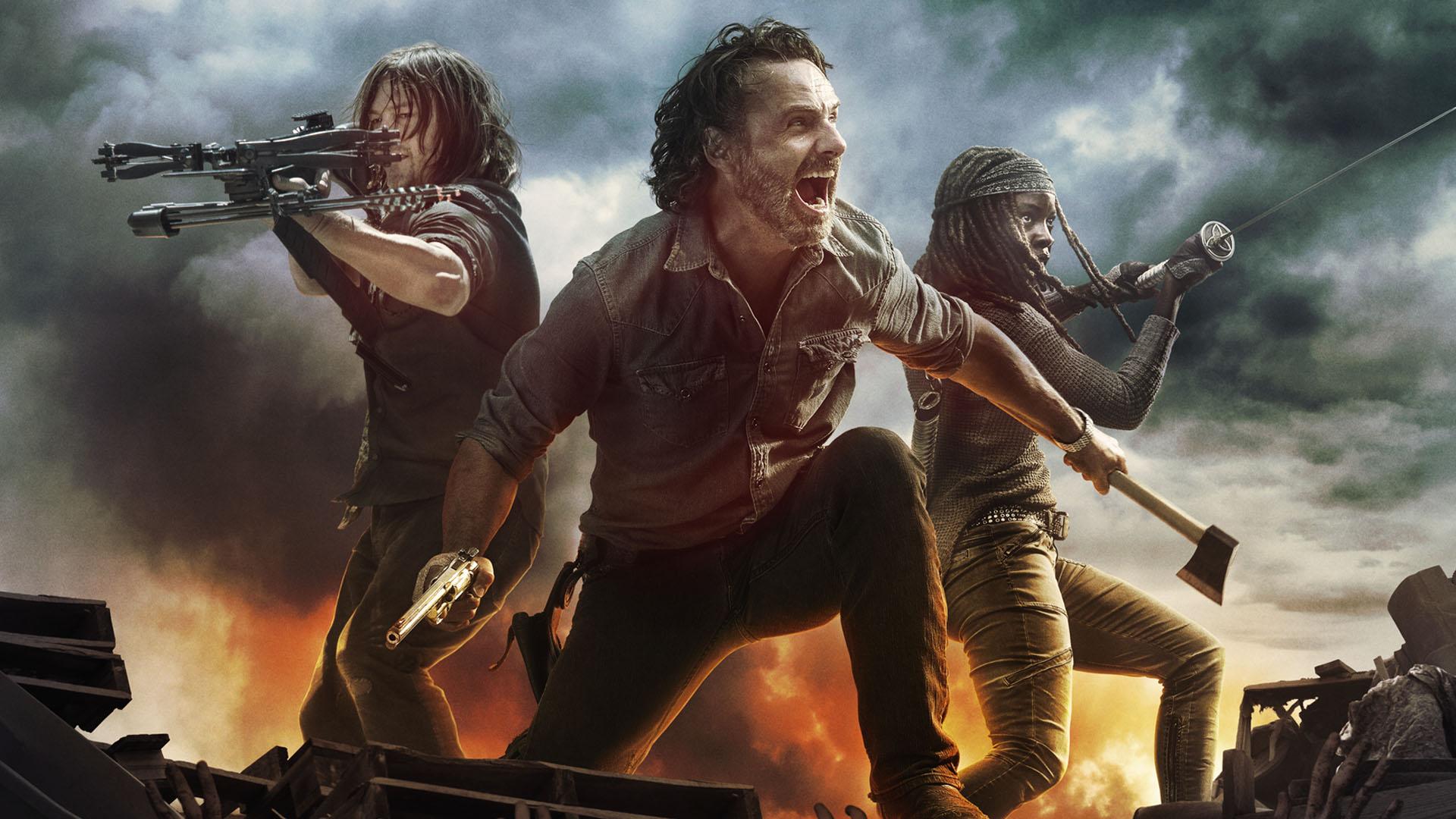 This has been promoted as Rick’s last episode by AMC.  And if you’re a fan of the show you should watch before you read on, because there will be spoilers, big ones!  Rick got himself impaled at the end of last week’s episode.  And a herd of Walkers were trudging ever closer.  So you kind of thought it was a given that he becomes Walker chow.  But he doesn’t.  In fact, he hoists himself up and off the thing-a-ma-bob he was impaled on, and bravely leads the herd of walkers away from civilization.  Because that’s the kind of hero Rick Grimes is.  And in a desperate attempt to blow the bridge they just spent all season building, so the Walkers would fall into the raging river, Rick ends up blowing himself up as well.  In full view of friends and family.  So Rick Grimes makes the ultimate sacrifice, or does he!?

The big twist is that Rick Grimes washes up on shore down the river, still alive.  He’s found by Jadis -Trash Lady, and they are picked up by helicopter and taken who knows where, so that he can be nursed back to health, and star in Rick-centric AMC movies that are totally separate from the show. What the heck?!  Rick, alive and well, and out in the big wide zombie-infested world, without Michonne, Daryl, Carol, Judith or his crew.  YEP! That’s what’s going to happen.  And to cement the fact that The Walking Dead Series is moving on without Rick, the show is lurching ahead six years without him.  And the future doesn’t look all that bright.  But we do get to see a badass 9-year-old Judith killing walkers and taking names.

Honestly, I don’t know how I feel.  I was prepared to mourn Rick’s death.  But now that he’s alive and just moving on without everyone else, I’m feeling abandoned. It’s more like a divorce than a death.  The show started with Rick’s relentless search for his wife and son.  And now it ends with Rick leaving his kinda-wife and possible-daughter to fend for themselves,  while believing he’s dead.  That doesn’t seem right at all!  And I just may end up moving on too.  The Walking Dead was already beginning to feel like it’s past it’s prime.  And now with this new gut-punch, it may be the perfect time to stop watching.  But I think I will stick around, at least until the mid-season finale, to see what’s in store for Daryl and Carol.  So Walking Dead, you have three more episodes to win me back.  But!  If it turns out that, in this new Rick-free world, 9-year-old Judith or Negan is in charge, I am definitely out.

AMC has announced The Walking Dead Universe.  Kind of like the DC Universe I guess. And the  first projects in development from Chief Content Officer Scott M. Gimple are three AMC Studios Original Films, starring Andrew Lincoln and written by Gimple. And they will continue the story of Rick Grimes.  So sound off! I know this wasn’t what anyone was expecting, so are you saddened or relieved by this turn of events? And do you think Rick will at least attempt to make it back to Judith and Michonne in those films?  And will you be watching the Rick-less “Walking Dead-six years later” series?

Here is an extended Promo of the next three episodes.  And remember, six years have gone by. You can tell because Eugene has cut off his mullet.