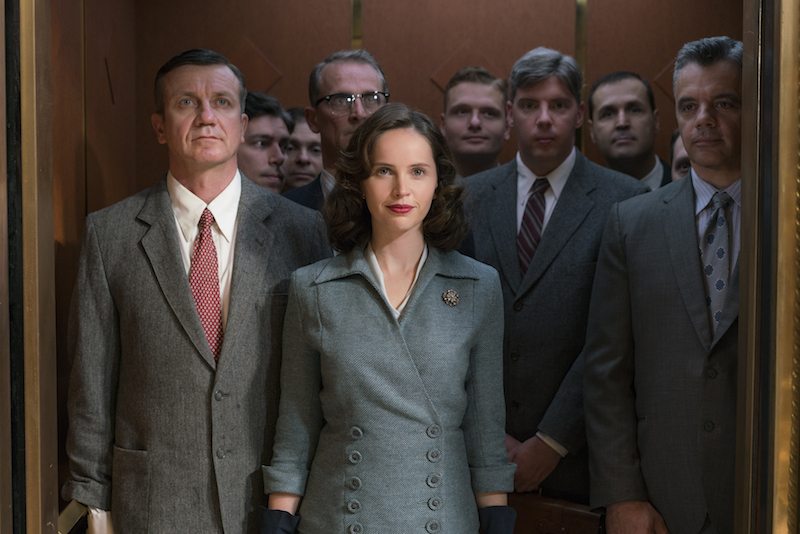 Felicity Jones stars as Ruth Bader Ginsburg in Mimi Leder's ON THE BASIS OF SEX, a Focus Features release.

Any biopic (pronounced BIo-pic) requires consolidating and artistic license to encapsulate anybody’s life into a two hour film. On the Basis of Sex turns Ruth Bader Ginsberg (Felicity Jones)’s life into an electrifying courtroom drama, including all the prep.

Ginsberg looks so fulfilled just entering the halls of Harvard, but the school makes it clear they’re grudgingly allowing women to play along. Dean Erwin Griswold (Sam Waterston acting a magnificent A-hole) makes sure to say “Harvard Man” as pointedly as he can, and even asks women to justify why they belong at Harvard. Nobody responds, “Because I got in” but Ginsberg mocks the Dean’s question.

On the Basis of Sex recreates the world of microaggressions against women. The professors won’t even call on Ginsberg, and the patriarchy acts like they’re doing women a favor by allowing them to contribute.

She teaches about the Hoyt v. Florida case where a woman was denied a jury that included any women. It’s important to keep these attitudes in the public’s consciousness because every generation seems to think that they’ve solved everything and we shouldn’t make any more changes. There’s always more progress to make and it would be so much easier if we didn’t have to fight the same battle every generation.

Ginsberg is such a badass. She attends her husband Marty (Armie Hammer)’s classes while he’s recovering from cancer, so basically, she’s doing two Harvard course loads. Jones portrays Ginsberg unwavering determination. The whole movie is smart people talking case law, even their 15-year-old daughter Jane (Cailee Spaeny). It’s very empowering to see them decide this is what we want, here’s how we’re going to do it. Leder makes real cases feel as dramatic as A Few Good Men.

The case that becomes the focus of the film and her early law career is Moritz vs. IRS. Moritz was denied a tax deduction for his mother’s nurse, because the law stated a caretaker could only be a woman, or a man who had been widowed. Moritz (Christian Mulkey) never married, yet he was caring for his mother.

This is all real 20th century history that is not taught in school. People should know how recently the world assumed that no unmarried man would ever have need to take care of someone, and also that such notions could be challenged and also changed. Also let this sink in: Sexism didn’t change until it affected a man.

We see how the men on opposing counsel, and the judges, decide what’s best for families. Meanwhile, we see how harmonious the Ginsberg family is with men and women sharing the load.

The case allows Ginsberg to be rattled by the sexist establishment. That’s what they do and we all learn how to weather it. The point isn’t to be impervious to righteous indignation. The point is to take the power back and this is how it’s done.

Ruth Bader Ginsberg has done so much in her life, any movie could feel like it didn’t do justice to all her accomplishments. By focusing on the Moritz case, On the Basis of Sex did justice to the principle through which Ginsberg established her fight for equality, and captures the world in which she fought.