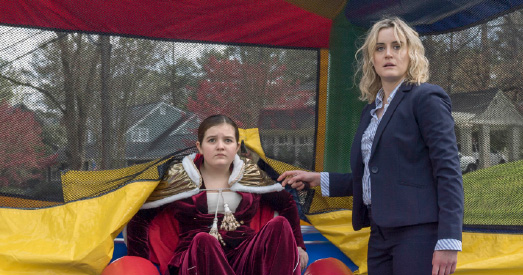 Hollywood loves to sell this idea that family is great and everyone should abandon their competitive careers and just embrace their insular world of relatives. That’s a really good way to discourage ambitious people from making it to the top. It takes an indie film like Family to say, “No, family’s not going to change your life but it’s got good parts and funny parts so you can do both.”

Kate (Taylor Schilling) is so ambitious she openly writes off a pregnant colleague’s chances at returning to work. But her brother Joe (Eric Edelstein) needs Kate to watch his daughter Maddie (Bryn Vale) while they help movie his wife Cheryl (Allison Tolman)’s mother into hospice.

Kate is not a bitch but she is a magnificent workaholic who just can’t even. Just saying no or “I don’t want to” is refreshing. We all buy into this social contract of never disappointing others, but what if we just didn’t indulge in coddling?

Her comebacks to suburban neighbor Jill (Kate McKinnon) are hilarious. She even driver’s positive gestures gruffly as she’s frustrated by overwhelming situations. Her outbursts against bullies, entitled brats and hollow authority figures are satisfying. Kate is undeterred by being wrong too. Not in an ego way, but just in a no bullsh*t apology way, let’s just move on.

Maddie is funny too. Running gags of karate class, a garage door and jugaloos pay off. Of course Kate bonds with Maddie but she never has to give up being Kate. She’s always true to herself and actually her Kate powers grow by finding new applications to help groom the next generation’s Kate.

Laura Steinel makes an impressive debut feature and I love Schilling as Kate. Heck, I love Vale as Maddie, Tolman as Cheryl, Brian Tyree Henry as Sensei Pete and Jessie Ennis as Erin, the new girl in the office. I’d shout out every supporting actor really. Family was really well cast so everyone delivers the laugh or punch the scene needs. I can’t wait to see more from Steinel.