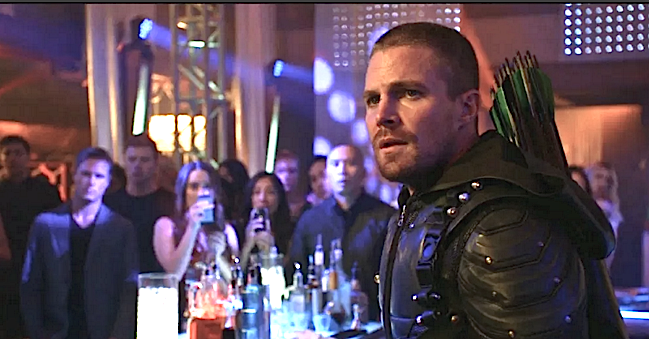 This episode faltered, turning into a Superhero Soap Opera. Here’s what happened:   After all that time in prison, mooning over that picture of Felicity and William, the first thing Oliver does when he gets out is hop back into the Green Arrow Suit, minus the mask, which potentially could put him right back behind bars.  I mean, he hasn’t even seen William yet, and has no immediate plans to.  And get this, Oliver an Felicity are at odds, possibly heading for a break-up. WHAT-WHAT!  And oh yeah, Diggle and Lyla start working with Diaz, on the down-low, despite everything he’s done.  And the Mysterious New Green Arrow turns out to be the half-sister Oliver Queen never knew he had.  I guess Papa Queen was a player. Literally making Oliver the ‘Brother-from-another-Mother’ that you often hear about.

Now let’s add to the ridiculous:  Dinah, as head of the SCPD, hires Oliver as an officer.  So that he can ‘legally’ go around as the Green Arrow and shoot people with Arrows, with no accountability. How exactly does that work? Because check it y’all, he’s been released but he’s still a convicted felon and killer.  The Green Arrow used to straight up execute people.  So why can’t the angry Mayor, who obviously disapproves, put a stop to this madness?  Nothing about it is legal… ANSWER: The writers wrote themselves into a corner, by outing Oliver as the Green Arrow, and decided that total nonsense is their only way out.  – What happened Arrow!? You jumped the shark a while ago, but now you’re riding it….

NEXT WEEK is the Elseworlds crossover…