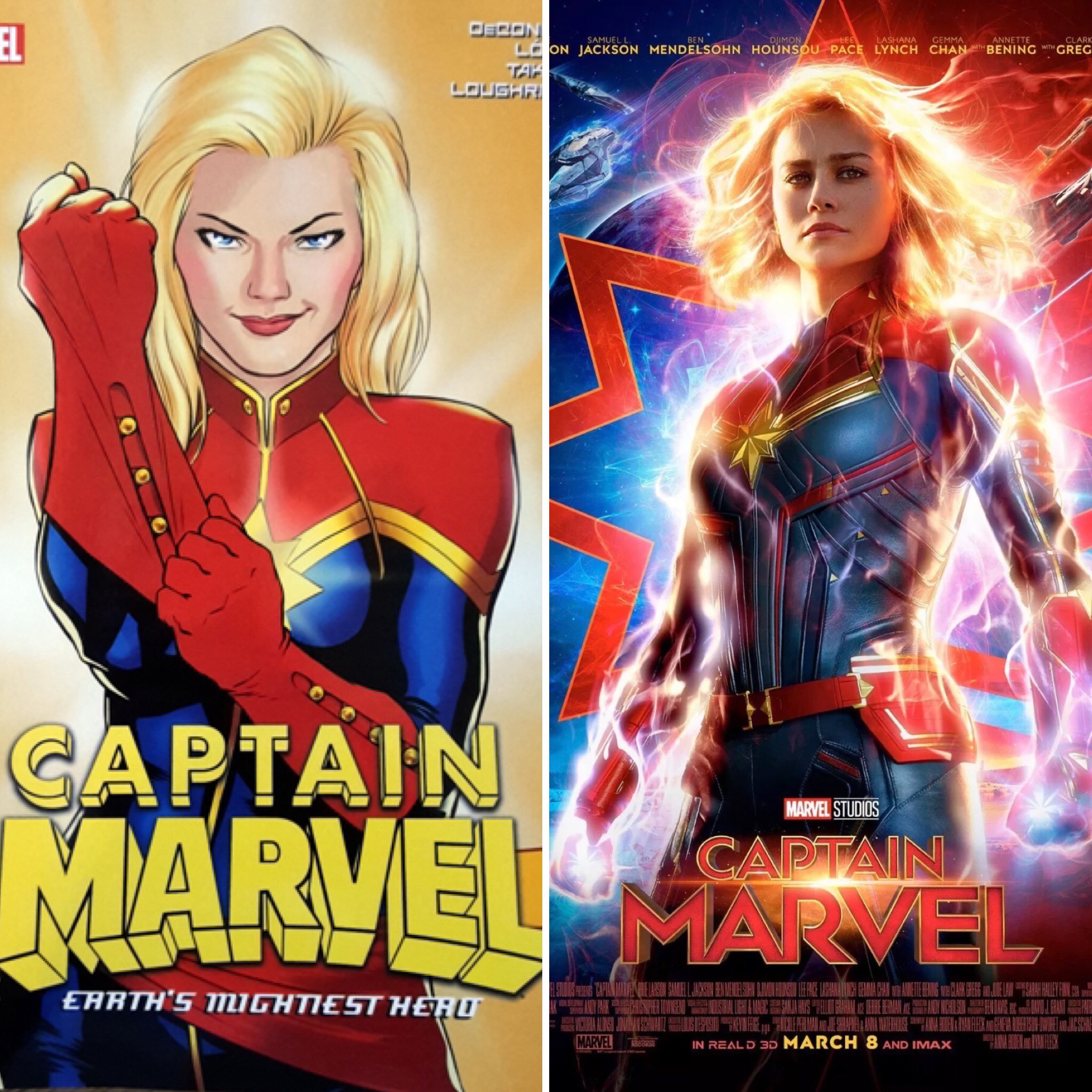 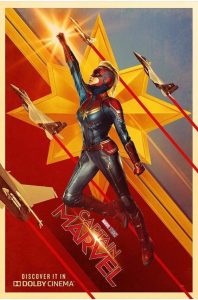 By the stroke of midnight, January 1, I promise you that my wallet had burst into flames. The hurricane of trailer drops, cons and theme park announcements heralding the arrival of 2019 had my excite-o-meter turned all the way up to eleven!  Honestly the last time I was this excited was in the third grade, specifically waking up on the morning of May 25 1983.  At the start of this year maybe you too felt as I did,  just like Belle while Lumiere and his cavalcade of culinary collaborators serenaded her with the details of her fantastic feast.  But in this case, it is Marvel that proves to be the maestro behind the fantastic geek buffet of entertainment I’ll be dining on over the coming months!  And the center piece of this awesome spread is one of the most incredible heroes in their arsenal of powered people, Captain Marvel!

For me as a kid, there were two female heroes who were my go-tos whenever my Velcro sneakers hit the playground during recess. Princess Leia and Wonder Woman. Seriously, they each set fire to my imagination synapses, giving me permission to feel invincible!  Whether it was deflecting bullets with bracelets or commanding a fleet of rebel fighters, these two lionesses, helped me to not only face down my fair share of bullies, but they also taught me lessons in female empowerment that helped me make sense of my formidable teenage years as well. And as my squad expanded throughout my childhood to include the likes of Ellen Ripley, Cheetara and Storm, my adult years introduced me to a real game changer when I was made aware of a being of such incredible might, dynamic versatility and relatable vulnerability. Carol Danvers, aka Captain Marvel.

Having grown up on what I thought was a complete diet of sci-fi, super heroes and fantasy, I am embarrassed to admit that it has taken me this long to become acquainted with a hero who even by all accounts of her very own creators, is one of the most powerful beings in the comic book universe. But I feel like I have truly reached a juncture in my life where the timing is just right to become a fan. And that is just what happened. Once I found out how much the fate of the MCU now depends on Carol Danvers very existence in this onion blossom of stories that were leading up to one of the most heart breaking defeats of some of earth’s mightiest heroes, I woke up to my new nerd mission.  So I set out to learn as much as I most possibly could about the hero who would do everything in her power to help her fellow fallen heroes save the day.  I usually don’t mind walking around with a Bird Box blindfold on when I am on the cusp of entering a new playing field of cinematic comic book interpretation, but I think it’s safe to say that the intrigue surrounding Captain Marvel for fans who don’t already own stacks of comic books in their attics, is way too enticing.

When I first ventured into Cap’s origin I half expected a mish-mosh of cliche beginnings that were nothing more than an amalgam of other hero stories. WRONG!  I was so wrong. What I found was that Marvel had created an entire universe to tell this one person’s tale that branches into the adventures of just about every single character they’ve created. I could start out by telling you that Carol Danvers career of choice had save-the-world written all over it, as a member of the Air Force, eventually segueing into working with NASA, which is most likely one of the few consistent details of her life story.  But the rules of comics are, there are no rules because hers is truly a revolving door of biographical anomalies, especially when it comes to how she obtained her powers. OG back issues attribute it to a fusing of DNA between her and the fairly friendly Kree warrior Mar-Vel, thanks to getting exposed to a blast from a “Psyche Magnetron”. What does this intimidating mechanism do, you ask?  Well it was created by the Kree and if you just happen to find yourself within the vicinity of this device while you are wishing on a star to become the most powerful force in your universe, then consider this thing your intergalactic fairy godmother of sorts. But hold on a sec because, if you decide you want to fast track your way through Captain Marvel’s history in advance of March 8, and you start reading the current Marvel series, The Life Of Captain Marvel, you will have no doubt discovered a revised history lesson, in that Carol’s powers are hereditary.

Another thing about Captain Marvel that I wanted to make sense of was what the name meant to fans of both the DC and Marvel libraries.  A long time ago in a 20th century far far away, Fawcett Publishers had at first used it as the original alter ego moniker of Billy Batson, triggered by his exclamation of the word, “Shazam”.  But by about the 1950s Fawcett had discontinued publishing any additional stories about their hero. Then during the 60s, Marvel had given the name Captain Marvel a new lease on life and trademarked it for their own use. So by the time DC Comics had acquired Fawcett Publisher’s menagerie of heroes, they were a day late and a buck short of retaining the name, thereby conceding the loss and renaming their hero Shazam.

Here’s something else that crossed my mind while I was recently rewatching Captain America: Civil War. I wondered which side would Captain Marvel have been on or would she have played it safe as more of a Super Switzerland?  It appears that Marvel gave Ms. Danvers both options A and B because according to comic book resources she initially chose to stand with her brethren who felt that powered people, especially the ones who went rogue (no pun intended) should be held accountable for all of the mayhem they caused while saving the world. So initially, she chose to join team Stark and supported the decision to help enforce the ungrateful parameters of the dehumanizing Superhuman Registration, which sadly served to divide The Avengers.  I won’t lie, there was a bit of bias hidden in plain sight of the previous sentence.

But during Civil War part deux, Captain Marvel found herself at odds with Stark over whether or not it was the greatest of ideas to utilize the newly acquired precognitive powers of their fellow Avenger, Ulysses, in order to get in front of a crime before it happened. If you thought you had to pick your heart up off the floor after suffering through the theatrical events of Infinity War, you’ll be knee deep in chopped onions after wading through the pages of Civil War II.

Now because the MCU is sort of tossing Captain Marvel into the fray of the maelstrom with the release of her movie right before the floodgates to Avengers: Endgame are opened, there are a few phrases you may hear in association with this hero. Binary and white holes. I am very curious to find out if at any time during her stand alone, she will at some point be referred to as Binary. The best way I can think of to explain Binary and for that matter the force behind having binary powers is this.  Take the sun and feed it another sun of equal mass and energy. Now you have one super sun that can pretty much light up the entire galaxy.  In Marty McFly’s words, “this is heavy”, and with good reason because after the decimation of the snap that brought every red blooded nerd to their knees, we will definitely need fire power of this magnitude to right the wrongs committed by the Mad Titan. But wait there’s more, because in addition to her amazing assortment of skills Captain Marvel can also tap into the power of a white hole which, as I have come to understand it, is the opposite of a black hole. Where are Stark, Banner and Pym when I need them?  Basically from a white hole you can get enough power to manipulate things like time travel and massive amounts of energy. If you master a white hole you can make it however big or small you need it to be and you can move it around space.  Apparently this is pretty handy because although gravity prevents objects from entering a white hole, it is still possible for one to expel matter and energy.  Sounds like just the sort of brass knuckled boxing glove one would wear when attempting to slap the taste out of Thanos’ mouth!  But let’s move on.

With all this talk of her virtual indestructibility it is to wonder how and if it is at all possible for Captain Marvel to ever be defeated.  Well, she can be and has been on more than one occasion in the comic books. But she routinely reinvents herself by picking up the pieces of her life, regaining some vestige of her powers and moving forward. At times she has fallen down and stayed down for extended periods of time.  Her flaws and foibles are as plentiful and common to the common man or woman as one would expect of someone who has traveled from one end of the galaxy to the next.

But one thing is for sure and that is when she makes her presence felt, Captain Marvel won’t need to say her name twice.  Expect for more than a few Skrulls to get dragged, that Ronan will probably wish he could dance his way out of another blue butt whoopin’, and Thanos…well, let’s just all agree to be present for what happens when Fury’s vintage SOS reaches its intended receiver.

So that was  just a wee  bit of backstory on Marvel’s marvelous maven of power, which should prove helpful for anyone not in the nerdy know, sitting in a crowded theater, shoulder to shoulder with my fellow nerd herders as we collectively lose our minds during opening credits. And if you think what you are about to see is the beginning and the end of this hero’s journey, think again.  Carol Danvers history is a diverse odyssey of challenges and changes, that in no way can be summed up in a two-hour movie. To put it this way, if I were a psychologist in the MCU and Carol Danvers was my patient, I would probably need a daily dose of gamma rays just to get me through her therapy sessions alone!