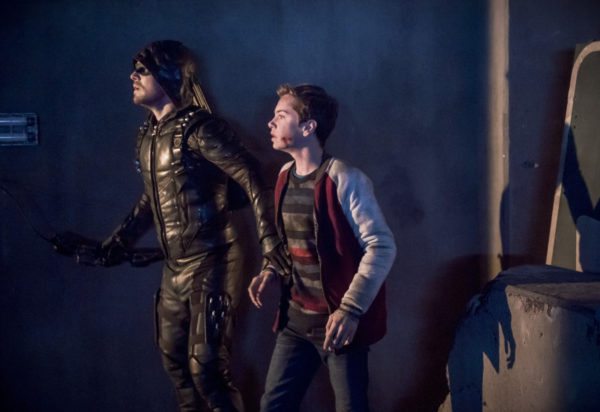 This is Arrow’s 150th episode, and it’s all about getting the band back together.  And William, Oliver’s kid, shows up too.  I liked it. And we got to see testimonials from some past cast members, and Barry Allen.

A documentary crew, doing a piece on vigilantes, is following Oliver around as he tries to stop some random bag guy that’s hunting vigilantes.  And joining in on the chase are the rest of Team Arrow, though thanks to the anti-vigilante law, they all could be sent to prison.  Question: Would they all fit in Oliver’s old cell?

Oliver and the team, stop the bad guy, save the uptight Mayor’s life, along with countless others. And instead of jail time,  the rest of Team Arrow get deputized, so they’ll all be legit like Oliver. So now the team is reunited. YEAH! Though Diggle hasn’t told Oliver about his dealings with Diaz yet.  That’s going to be a rough conversation.

And what about William you ask?  Well he’s back and bitter, just like his future self.  He feels abandoned by Oliver and Felicity, which he pretty much was.  I mean, Oliver cried about missing his son William while he was locked up.  But when he got out, he didn’t go see William or appear to give him much thought.  And now that William is back, the kid’s got a secret he’s not telling.  But it got him kicked out of school. I guess we’ll have to stay tuned to find out.