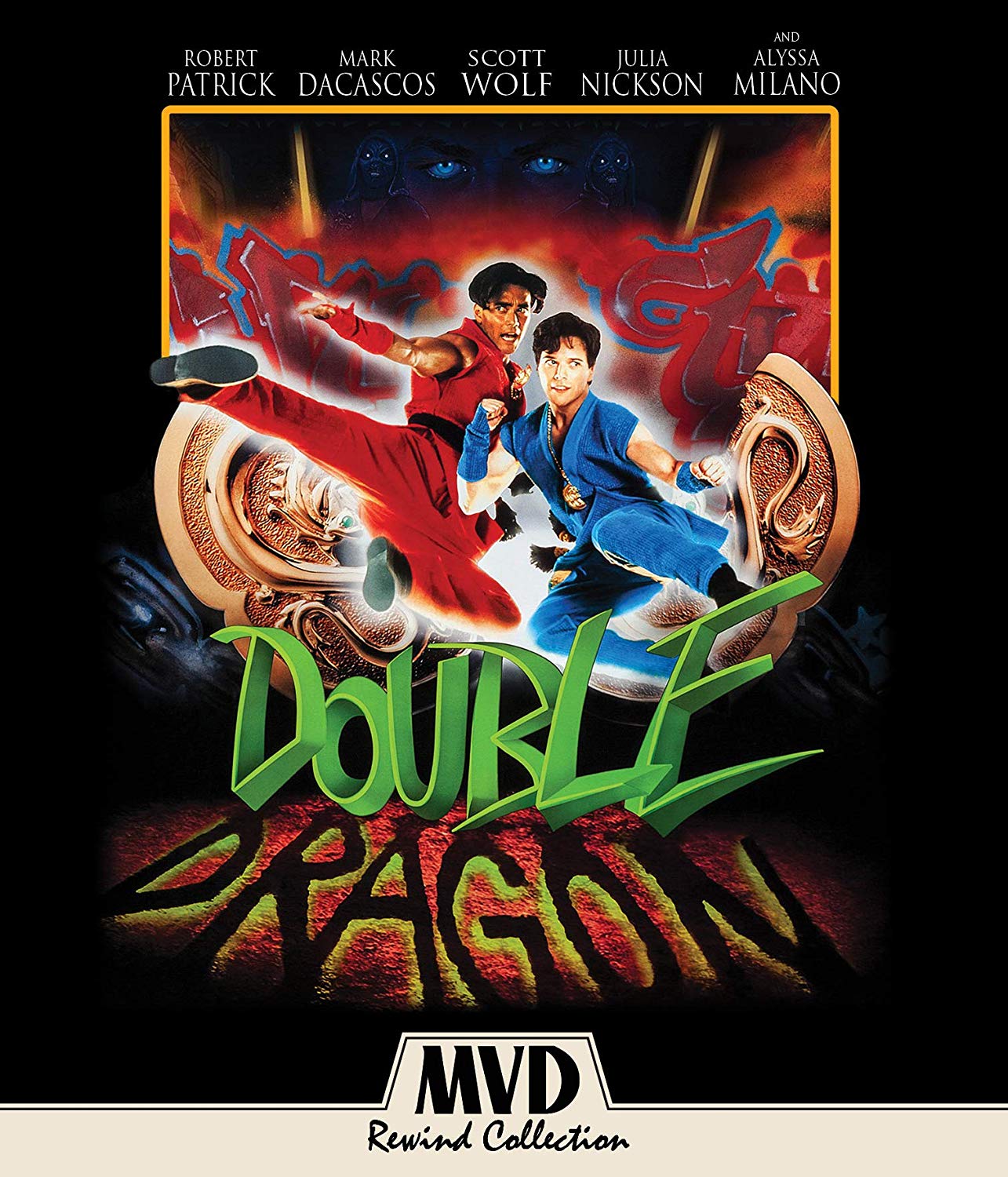 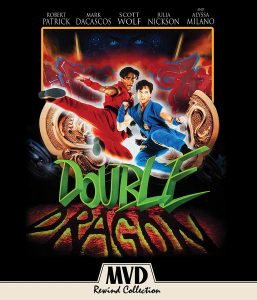 I did not see Double Dragon in theaters. I don’t think it even opened near me in Annapolis, MD. I did see the trailer in theaters tho before Timecop (and before the Street Fighter: The Movie trailer which was attached to Timecop). I didn’t see the whole movie until Mark Dacascos came out in Brothererhood of the Wolf and I was looking for more Mark Dacascos movies. As such I’ve never seen Double Dragon look as good as it does on Blu-Ray.

Double Dragon has a reputation as a bad video game movie. That’s kind of unfair since it’s only the second movie based on a video game ever released. It is a huge improvement over the first, Super Mario Brothers. And now that there’ve been so many worse ones, there’s nothing wrong with a fun, silly Double Dragon movie.

It doesn’t have much to do with the video game except it’s two brothers who fight, Jimmy (Dacascos) and Billy (Wolf). The game was a simple fighting game where two players could fight through gangs to rescue a kidnapped girlfriend. The movie is set in futuristic (2007) LA with a mystical medallion.

Taken as a generic martial arts movie it’s loads of fun, and few things give me more joy than what the ‘90s thought the future would be like. George Hamilton and Vanna White are newscasters and Andy Dick does the weather. It’s not Robocop level satire but it’s fun, lots of reports about what ‘90s celebrities are doing in the future.

They make corny jokes that I think would have appealed to kids who still went to arcades.  The fighting and action are sound. Every few minutes Billy And Jimmy run into a gang they have to fight, in a location with lots of fun props to fight with. Clearly Dacascos is a real martial artist and wolf is a movie fighter but they make a good team.

Early CGI effects are cheesy AF but they’re not trying to look real, which they do now and still look cheesy. I like the effect where Koga Shuga (Robert Patrick) turns two dimensional. Abobo is a physical suit so that’s fun.

Wolf would’ve shot this right before Party of Five started so that overshadowed this forgotten movie. Dacascos would toil away In straight to video martial arts movies. Alyssa Milano would find success again on television. Robert Patrick would never hurt for work in his entire career.

The Blu-Ray lets a forgotten B movie look like Blade Runner. The streets are slick, the rubble gritty and the matte paintings gorgeous. Keep an eye out for the background where the Capital Record building gets Leaning Tower Of Pisa’d. They’ve done a really good job recreating a post quake LA. Locals could really appreciate it. It’s better than Escape from LA.

“The Making Of Double Dragon” is over an hour. Scott Wolf did an interview! And writers Michael Davis and Peter Gould who have both done great things. It’s an interesting postmortem knowing the movie did poorly but enough people like it to make a Blu-Ray. The writers had a clear vision that got diluted by studio notes. Wolf and Dacascos are more endearing towards it. If you want to know how something crazy ended up in Double Dragon, Davis has the story. Too bad director James Yukich didn’t talk. Maybe it was too hard an experience.

A 24 minute Don Murphy interview goes into more depth on the tonal issues of the movie. His original plan for a hardcore martial arts movie may have been good but I don’t mind the Double Dragon we got. His stories about Bryan Singer on Apt Pupil were probably filmed before the Atlantic story broke. It’s nothing bad. It’s just one of the movies he produced. It’s too bad he skips over Shoot ‘Em Up, which Davis wrote and directed.

The pilot for the Double Dragon animated series is here in standard definition. The theme song rhymes dragon with braggin’. Two behind the scenes features from 1994 show a lot of action scenes being filmed. The behind the scenes gallery comes from Polaroids. That’s how they did it in the ‘90s. 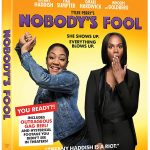