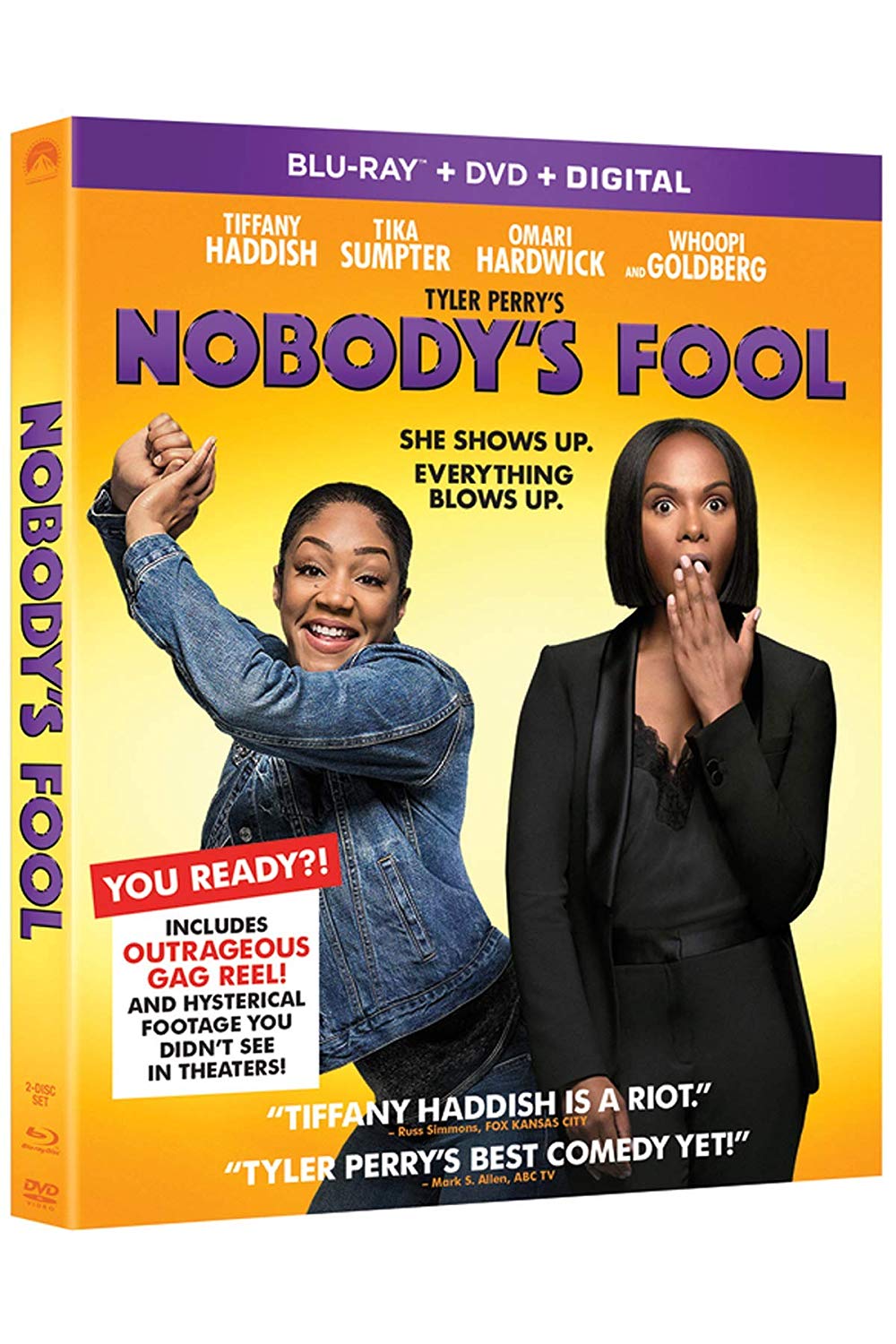 Now on Blu-ray, DVD, and Digital.

In 1993, Paul Newman starred in a movie called Nobody’s Fool for which he was Oscar nominated. 25 years later, Tyler Perry took Nobody’s Fool back to make it a Tiffany Haddish comedy.

Danica (Tika Sumpter) is having a long distance relationship with Charlie whom she’s never met. Charlie always has some excuse why they can’t Skype. He works on an offshore oil rig and the Wifi’s not strong enough. When Danica’s sister Tanya (Haddish) gets out of prison, she gets suspicious enough about Charlie to call MTV’s Catfish: The Series. Nev Schulman and Max Joseph cameo as themselves and basically do a whole episode of Catfish to explain it to any audience members who have not been online in the last decade.

Haddish is relentless. She has a reaction to everything she sees, including Nev and Max from Catfish. She’s physical trying to walk in heels and climbing over the counter. Danica’s standards are a bit judgmental. She won’t date ex cons or recovering addicts, which rules out sweet coffee shop owner Frank (Omari Hardwick). It also sort of sets her up for a Catfisher to prey on her too good to be true expectations. Danica also denies her feelings about the breakup with Bailey (Adrian Conrad). So it’s a journey for her to be more forgiving and honest with herself.

Nobody’s Fool may be Tyler Perry’s most consistent movie. Usually there are so many drastic tonal shifts in the first 20 minutes you can’t classify a Tyler Perry movie by genre. Nobody’s Fool stays focused on the Catfish comedy and love triangle for a good 80 minutes.

It’s maybe Perry’s most Hollywood movie. Tanya gets a job at a coffee shop the day after she gets out by fixing a coffeemaker. And Frank loves Danica so he’s willing to overlook Tanya’s record. So it’s contrived but it moves the plot along. Danica also works in advertising and has to make a big presentation to the client. What would a rom-com be without a big presentation?

It’s fun how much sex talk there is and they go on riffs. That’s R-rated grown up comedy. It’s a great trio of girl power friendship between Tanya, Danica and Danica’s partner Kalli (Amber Riley).

It finally becomes a Tyler Perry movie in the last 20 minutes. Imagine all the tonal shifts of a normal Tyler Perry movie all in the last act of a movie. A twist that would seem like a high concept farce in a normal rom-com plays as overly serious here. And then Tanya warns Danica that Frank could relapse if she breaks his heart, as if it’s Danica’s responsibility to stay in a relationship to keep him sober!

And man oh man, Tyler Perry cannot shoot sex scenes. The O faces and closeups of feet and simulated positions are like what a robot thinks human sex is like.

Nobody’s Fool is a slick looking movie so it looks great on Blu-ray. The ad agency office has way better lighting than real life, and same for the coffee shop. Tanya and Danica’s mom (Whoopi Goldberg)’s house is full of bright colors vs the corporate world. The cast looks glamorous. The green screen driving shots look extra fake though.

In deleted, extended and alternate scenes, Missi Pyle gets to riff. So do Nev and Max. Were they planning to give them even more screen time? They probably did it like they do the show. Most importantly, there’s more Haddish. Any of the new stuff could’ve gone in the movie and only added five more minutes of comedy gold. Sumpter gets to let loose in an alternate breakdown scene. The gag reel from the end credits is included in full HD.

Interview features are pretty standard but I caught Haddish referencing Halle Berry in BAPS. She gets genuinely emotional about Whoopi Goldberg playing her mother which is a strikingly raw moment for these polished behind the scenes bits. Perry throwing out comedy lines is pretty fun too. Two fake perfume commercials are fun too.