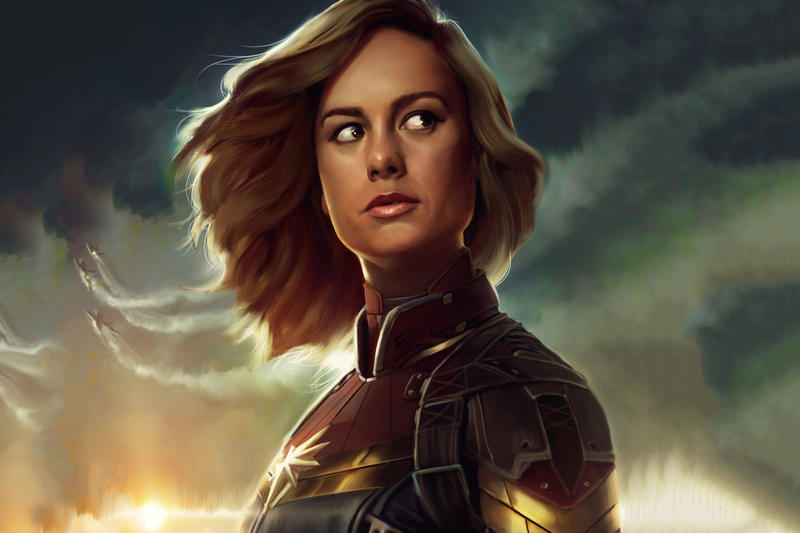 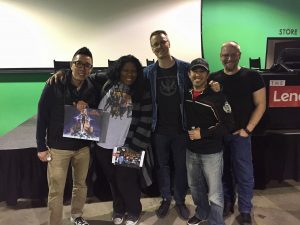 I’ve always known that I was a nerd, I just never knew that I could geek out hard enough to actually go binary. Well, a few nights ago all of that energy came shooting out of my face when I met Marvel’s Visual Development team during the event, The Art Of Captain Marvel: An Evening With Marvel Studios. In fact, I was surrounded by greatness the minute I stepped foot on to the campus of Gnomon – School Of Visual Effects, Games + Animation, which served as the venue for the incredible experience I was about to have. As I walked the hallowed halls of genius nurtured by this academy for talented and gifted youth, my mind entered multiple doorways into realms made out of pure imagination. Knowing that the future of geek cinema rests in some of the most capable hands of this school’s student body and alumni left me completely awestruck and relieved.  So it is no wonder that this is the place where I would meet a few of the real heroes working behind the scenes of the MCU.

From the moment that the panel of guests was introduced to the stage, it felt as though I had morphed back into a ten-year-old. In amongst an audience of fellow wide-eyed big kids, I sat there wearing my favorite Guardians Of The Galaxy graphic tee-shirt eagerly waiting to hang on every word I was about to hear. If you consider yourself a loyal ticket buying admirer of Marvel’s cinematic accomplishments over the last 10 years, then that automatically makes you a fan of Andy Park, Director Of Visual Development at Marvel Studios. Andy answered the call to join the MCU initiative back in 2010. Since then he has had a hand in successfully assembling earth’s mightiest heroes making their explosive leaps from comic book panels to the big screen. But he didn’t do this alone and from his modest demeanor, Andy Park would, without a doubt, be the first person to acknowledge how teamwork makes the dream work. So, of course, he’s flanked by a few of the many of his Captain Marvel MVPs, such as Anthony Francisco, Ian Joyner, and Tully Summers. Missing from the panel was their comrade in arms of visual wizardry, Jackson Sze, who had to, unfortunately, bow out due to illness. Their own collective body of work encompasses many other legendary “household-name” titles.

Time is never on my side when I’m having the time of my life so the hour and thirty minutes I spent listening to this group regale the audience with the stories behind how they created the gorgeous renderings and digital imagery of Carol Danvers’ transition from Noble Kree Warrior Hero into quite possibly the most powerful being in the entire Marvel Universe, went by within the blink of an eye. In listening to each of them speak you really got a sense of the community of family that exists within their department. They gave off a warm impression that their work life was truly a “leave your ego at home” atmosphere because the camaraderie, respect, and support that each of these talented artists displayed were undeniable. I bared witness to what appeared to be a limitless assortment of equally gorgeous character variations, costume designs, weaponry and a few vehicles based on both the comic book origins and of course the natural rhythm of the Visual Development team’s creative thought process. Each time an image transitioned across the screen behind them, my mind was blown. A few key points that stood out to me during the panel discussion included how after creating so much of this beautiful artwork, some of and at times even none of the pieces were used during the final decision making phase of the process by the studio executives. But on the flip side, there were certain objects invented by the team that was incorporated into actual scenes of the movie!  Another impressive detail that was briefly covered was how the MCU maintains that Marvel “look” without becoming exasperated. Andy spoke about the challenge of not giving audiences the same thing to look at over and over again, and how he and his team are constantly exploring ways of expressing new imagery with each addition made to the continuous Marvel movie expansion.  Speaking from my point of view as a fan I have to admit that it is nice for the sake of continuity that the current lineup of characters, worlds, and accessories all share the same DNA. Especially in light of the fact that for the last ten years, everything within the MCU has been leading up to Endgame!  A particular reveal that I also thoroughly enjoyed hearing straight from the horse’s mouth so to speak was the revelation regarding when audiences were initially meant to meet Captain Marvel.  Did you know that there was an instance at the end of Avengers: Age Of Ultron, during the part when Steve Rogers introduced the newest members of team Avenger, that Carol Danvers was to appear at the Avengers facility flying down from the sky to join the group?  I did not know that!!  However, AOU Director, Joss Whedon determined that the timing of that introduction would have blindsided the audience resulting in a fairly inappropriate way for any of us to properly make her acquaintance. For as outstanding as that would have been though, in my humble opinion it was the right thing not to do.

As the evening wore on, all of our time was spent focused primarily on Captain Marvel, Starforce, and the Skrulls. I waited with bated breath for images of Goose to fill up the screen for I had oh so many questions about that scene-stealing Flerken who also stole our hearts! I wanted to know if any of the earlier concept artwork included a glimpse into the different pocket dimensions encompassed by the toothy tentacled tabby or if there were keyframes created to show where in time the Kree soldiers whom he had swallowed had landed. But alas the absence of Jackson Sze would leave these questions unanswered or at least postponed until another opportunity arises for the asking.  The panel discussion then concluded with a spirited Q&A.

My first question had to do with what impact if any, did the Visual Development design have on toy figures such as the ones created by Hot Toys and Hasbro Marvel. Toy collectors reading this article take note.  The Hot Toys miracle workers don’t necessarily rely all that heavily on Visual Development concept art when they are coming up with the likenesses of their extraordinary sixth scale figures. However, Hasbro’s action figures, in this case, the Marvel Legends figures are more closely based on the concept artwork!  Although I do consider myself a fan of HT, my wallet is a permanent patient of the Wells Fargo hospital ICU, so the Hasbro price points don’t usually result in a code blue.

The second of my three questions had to do with which pop cultural mediums inspired each of them to pursue their current careers? Was it a cartoon, movie, tv show or a toy? Across the board, the answer, of course, was comic books but there was also a mention of He-Man and Thundercats, adding further confirmation that we were all definitely in good company.

My third and final question had to do with if anyone on the panel found anyone MCU character to be a particular challenge to perfect. Instead of everybody taking turns sighing or groaning over the white whale that got away from each of them, the question was answered in a way that denoted just how much this group has an appreciation for the visual construction work that goes into bringing the MCU to life.  They described how paying a higher than usual attention to design details, whether it be the functionality of a costume or giving believability to the anatomical correctness of a Skrull as well as a vast number of other important variables also contributing to the seamless visual history lesson about a fictional world revolving around a heroic woman with the power to serve and protect an entire universe, was just another day at the office.

To say that the evening was amazing is a disservice to all of the English teachers who encouraged me to read the dictionary for fun. It was stupendous! It’s one thing to meet and greet the talent in front of the camera. Don’t get me wrong, I am still capable of executing feats of starstruck embarrassment in the presence of a Hemsworth or a Hiddleston.  But it is the encounters I have had with some of the other hardest working people in the industry who perform their magic behind the scenes that will always trigger me to make a phone call to my mom, so that I can tell her all about what I thought was one of the coolest things that have ever happened to me.

After having shared such a fun-filled evening with such incredibly creative people, for me, there is no denying that Marvel has truly employed a Visual Development team consisting of some of the most devout decons of geek who are truly doing the nerds work!