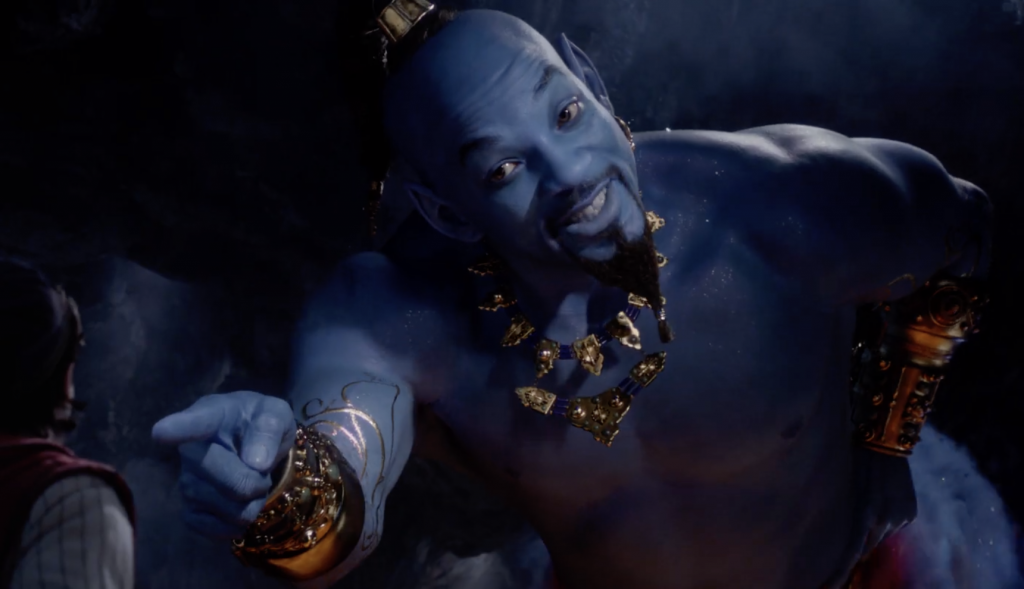 If you thought that Will Smith’s genie would turn out to be a disappointment, you were way wrong. He was one of the best parts of a very fun, but slightly flawed film.  While I really had a good time with this version of ALADDIN,  I think that the new ‘hot’ Jafar and Iago were the weak links in this re-telling.  And while Jasmin was a delight, her new story arch didn’t feel  organic to me. It felt a bit too ‘on-the-nose’, and self-proclaimed. Great points were made, but I wish more was said ‘about’ her than ‘by’ her.

Overall, I found this film version of  Aladdin, the tale of a boy and his Genie, to be over-the-top fun. But I do wonder why Guy Ritchie chose to deflate the roles of the villainous Jafar and Iago. When they are so comically evil in the original. This new film may be live-action, but it isn’t grounded in reality. It’s a big, colorful, and funny fantasy, with a big blue guy, a flying carpet, and a monkey.  So a comedic and dastardly Jafar and Iago team would have fit right in.

But bad guys aside, I think this new version of Aladdin is well worth a look-see.  Naomi Scott’s Jasmin, Will Smith’s Genie, and Mena Massoud’s Aladdin are stellar. The music and comedy are on point. And you know the story’s good.  So check it out this holiday weekend and let me know what you think.  And below, instead of posting yet another clip from the movie, here is a fun skit from ‘The Late show’ with James Cordon. Enjoy!