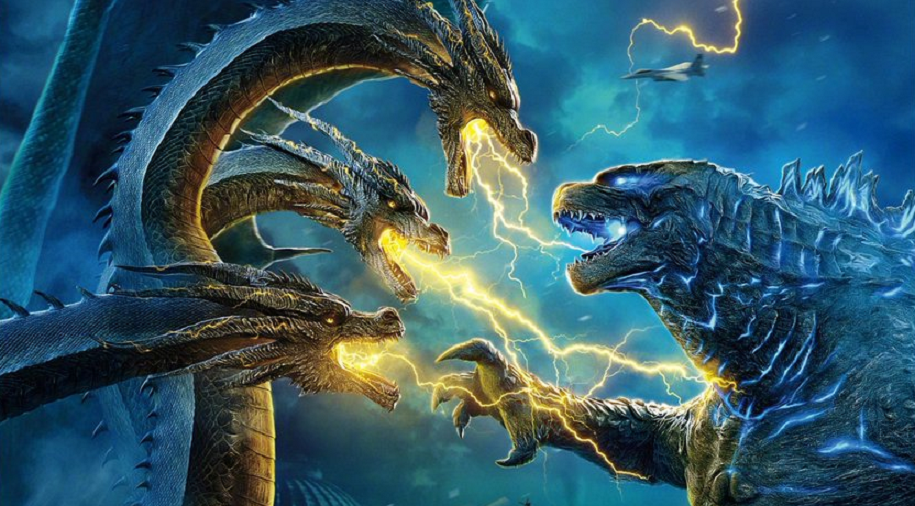 The humans in this film have to slog through a soap-opera-silly plot, but nobody cares.  This is a Godzilla movie!  And while this is a direct sequel to 2014’s Godzilla, you get a lot more monsters and mayhem for your money.  Too much in fact, for my taste. At 2 hours and 12 minutes, it overstayed its welcome by about a half an hour. But what about the monsters, which are also called ‘Kaiju’?

Godzilla and friends are big and badass.  But it’s always dark and rainy when you see them. So you never get a clear shot of the Kaiju battling, which I didn’t like. I came to see monsters; so show me the doggone monsters! In fact, the big three-headed ‘guy’ literally drags storm clouds around with him from place to place.  And I know it’s a ‘guy’ because they make a point of it in the film credits.  Yes, Godzilla and pals get screen credit for playing themselves.  And there are 2 guy Kaiju and 2 girl Kaiju. See if you can figure it out before the credits roll.   And there is an after-the-credits scene, so stick around.

Full disclosure, I’m not a fan of the genre, and this film didn’t win me over.  But I think die-hard Godzilla fans will get a lot of bang for their buck with this movie.  And there were a lot of Easter Eggs, I’m told, that are a nod to the movies of old.  Which people seemed to enjoy.  So if you’re a Godzilla-loving guy or gal, then this film’s for you.  But if you’re not, like me, you probably won’t be able to get of that theater fast enough.