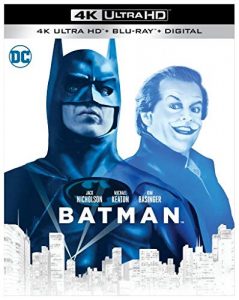 I have not upgraded to 4K yet, but the Blu-rays from these new Batman 4K masters are so good I can only imagine the full presentation. It just goes to show you that if they do a 4K restoration, even the Blu-ray is going to look noticeably better.

In Batman you can see every gritty detail in the opening bat symbol no matter how dark it is. The matte paintings of Gotham City are extraordinary, as is the production design on the ground. Even regular dialogue scenes look like Jack Nicholson is in your living room.

You can totally see the wire when Batman swings down at Jack Napier. You probably could on the big screen too, but you couldn’t rewind and double check. I like those revealing goofs. They let you see behind the scenes a bit. One shot of Batman approaching the Joker in the Batwing flares up with digital noise. I wonder if the 4K UHD corrects that. 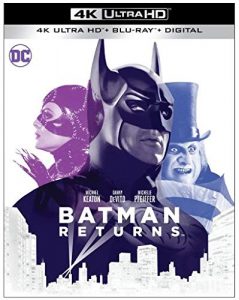 Batman Returns is a winter wonderland. The snow is a crisp white, especially at night when much of the film takes place. The Christmas lights really add some pops of color to the black and white gothic city. The new transfer also pulls out lots of texture and detail in Penguin’s underground layers, Selina’s crappy apartment stucco and the snow cover of Gotham City. The pink light of Selina’s home is pervasive and her Catwoman suit is extra shiny. You’ve got Batman fighting Catwoman at night both dressed in black and their shapes are sharp and distinct. 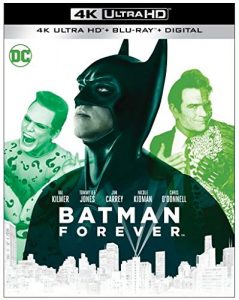 The Schumacher films change up the aesthetic. They’re a lot more fluorescent. They do balance the dark Burton look more than I remember though and these transfers can manage both in the same frame, especially with Two Face in Batman Forever. There is more beige though, like Chase Meridian’s office, and even Wayne Manor on the ground floor. The Grayson circus looks awesome with all the colors.

Batman and Robin is more confident in its aesthetic. It’s got more color in all the design including Robin’s red and Mr. Freeze’s Icy blue. The extravagant sets are magnificently gaudy with icicle, overgrown vegetation or Bruce Wayne’s rainforest party  in crisp detail and color. Much more liberal use of Gotham City miniatures look great too. 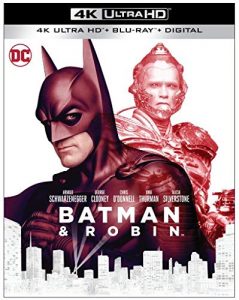 So I recommend the new 4K editions of the Batman films even as Blu-rays, and it makes me excited to see all of my favorite films again in new ways with 4K.