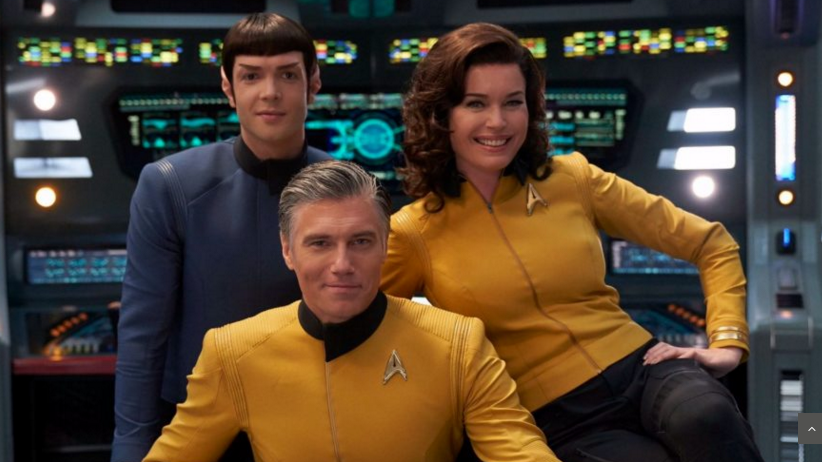 While looking fresh and new, Strange New Worlds seems more in-line with the original series, which it’s supposed to be a sequel to.  And I feel that this series, about the enterprise crew BEFORE Kirk took over, is a welcome addition to the Trek Universe.

Here are the five new crew members; but they don’t say who’s who.  Though my guess is that within this group are the Bridge crew, Doctor, and Head Engineer…

They join previously announced Ethan Peck (Spock), Anson Mount (Capt. Pike), and Rebecca Romijn (Number One), who will be reprising their roles from Season 2 of Star Trek: Discovery.

Below is some possible casting info I found that could point to who’s who in the new cast. And just an FYI, the character names given are often NOT the actual character names they’ll use on the show. AND, they might not all be human…

Yeboah. She’s Black, in her early 20s, and fresh out of the academy. She’s a linguistics genius, bright, promising, and the youngest member of the crew and she can sound “American” or have any other accent. (3rd Pic?)

La’an. She’s in her late 20s – early 30s and is the head of Security. She’s badass, physical, and suffers from PTSD. She has an air of vigilance and precision. They’d specifically like someone who is East Indian, Asian, or Middle Eastern, but are open to any ethnicity. (2nd pic?)

Ortegas. She’s in her late 20’s, Latinx, and an experienced vet. She has kept a drywit even with the combat she’s seen. She’s smart, funny, competitive, and is able to pivot from handling a gun to making a joke. (5th pic?)

Biodun. The ship’s doctor is a close advisor to Captain Pike, has an air of “easy erudition”, is male, Black, in his 40s, and curiously, “from the original series”. (1st pic?)