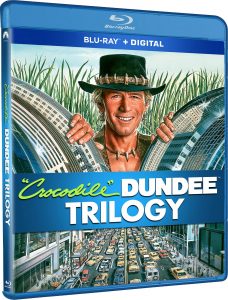 A New York reporter heads to Australia to interview the living legend Mike Dundee (Paul Hogan). When she finally locates him, she is so taken with him that she brings him back with her to New York. In New York, Mike Dundee is amazed by the wonders of the city and the interesting people there.

Mick “Crocodile” Dundee (Paul Hogan) is settling into his new Manhattan home when a South American drug dealer (Hechter Ubarry) abducts his girlfriend, Sue Charlton (Linda Kozlowski). The drug dealer thinks images of his criminal activities, taken by Sue’s photographer ex-husband, are now in her hands. The dealer takes Sue to Colombia and threatens her, hoping that she’ll give up the evidence. But intrepid Dundee, aiming to rescue Sue, is soon on the criminal’s trail.

Mick Dundee (Paul Hogan) is an adventurer in the truest sense. He is an ace crocodile hunter who lives in the wilds of the Australian Outback. He has even survived the dangers of New York City. However, his latest adventure may be the biggest test for him yet. Mick Dundee is traveling to that bizarre netherworld – Los Angeles, California.