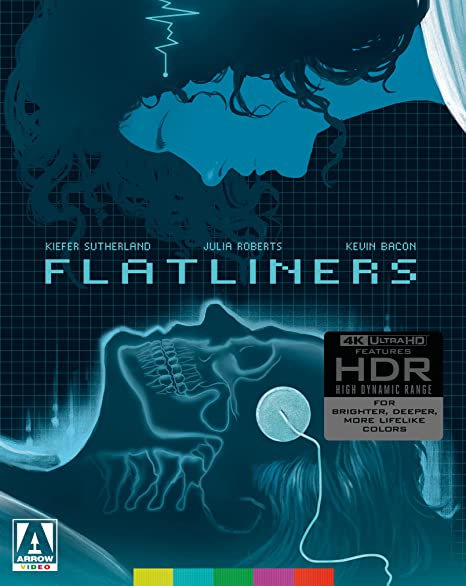 Flatliners may be a relic of a time when high concepts ruled Hollywood. Many people revived from a flatlined heartbeat reported expereinces with an afterlife. So if you could do it on purpose, what could you find? The film played out with a satisfying set of consequences for the A-list cast including Kiefer Sutherland, Kevin Bacon, Julie Roberts, William Baldwin and Oliver Platt.

The new 4K UHD from Arrow Video brings out the surreal colored lighting of Flatliners’ afterlife visions. From the orange sunsets to the cold blue death of post-afterlife encounters, there’s not a single shot in natural light. Every closeup is a colored gel.

Flatliners is dark and shadowy even in medical classes, and the 4K holds up. Whether blue, red or any tint, the picture holds up crisp and clear, and you can still see the film grain. Surround sound adds to the experience filling the rears with the moody score, or wind in the afterlife scenes.

Recent interviews with filmmakers from last year provide a lot of context. Screenwriter Peter Filardi discusses the AIDS metaphor director Joel Schumacher saw in the film, and why he took out the original title’s The.

Cinematographer Jan De Bont acknowledges the unrealistic surgical theaters and shares his Rembrandt influences. The lighting technician Edward Ayer adds how each character got their own color, and how they rigged lights outside windows. The subway scene has an interesting trick that could be done in any film school

First Assistant Director John Kretchmer also has great Schumacher stories. Production Designer Eugenio Zanetti and Art Director Larry Luny get mythological, but practical when it comes to a prop mistake they had to fix. They also point out the penis lights.

Composer James Newton Howard talks about his early career and using a choir for Flatliners, and Orchestrator Chris Boardman gets to speak too. Costume Designer Susan Becker explains how each wardrobe expresses character.

The commentary for Flatliners is by film critics and they are very prepared, keep the commentary relevant and consistent throughout. They explain the real-life locations, where the cast was at this point in their careers, and details like when the full moon actually falls on Halloween.

The cover art features a more impressionistic idea of what the movie is about. The theatrical poster necessarily showed the cast all huddled together so moviegoers could see who they’re getting, but now the fans know and the new art represents the theme of afterlife and medical experiments.

The included blooket features two essays on the film. Amanda Reyes explores the real-life history of near death experience and cinematic portrayals. Peter Tonguette has a more analytical approach to Flatliners’ specific perspective on the afterlife, concluding it is more religious than atheistic. 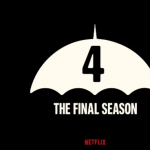 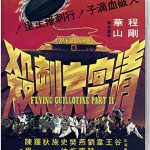